It's been a weird couple of days for fancy dress. Friday morning it started raining on the way to the station and by the time the train had been delayed for 10 minutes everyone on the platform had taken on that defeated drowned-rat look. At Cambridge, grim-faced end-of-the-week commuters were met in the entrance hall by poor unfortunates who'd decided to dress up in big furry animal suits to collect for a children's charity. I think they realised they were on a hiding to nothing as we all charged snarling through the ticket hall, dripping with rain and lacking any benevolence whatever...

Last night there was a fancy dress party somewhere nearby. On the way over the Green to the village shop, I met a man clad in boxer shorts and an apron, wielding a cardboard meat cleaver; Jin at the shop had spotted two Morticias, a Frankenstein's Monster and a guy dressed as a huge pumpkin who'd had to stand outside and shout his order in through the door... it had all calmed down again by about 3am...

OK: knitting. Thought I'd block the couple of scarves I finished this month, both Christmas presents although I'm not sure who they're for...

Here they are pinned out on the bed (on manky blocking-sheet): 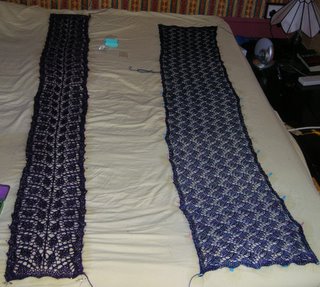 On the left, Branching Out; and on the right a Traveling Vines scarf, made longer than the original pattern suggested. I've gone on about the yarn for Branching Out elsewhere; Trailing Vines is Patons 3-ply Baby Wool, which I dyed turquoise originally, and then overdyed in purple. It makes a good laceweight if you live in a relative yarn desert and own some dye...

Stitch detail of the Traveling Vines: 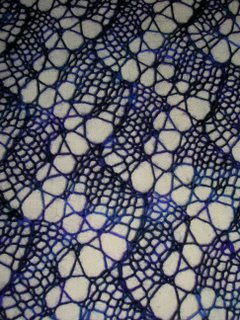 And a close-up of a Favourite Thing, a Clover forked blocking pin. 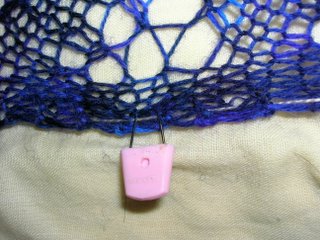 I have two dozen of these babies, and if anyone who might read this has any influence with Clover Europe, we need to start a lobby to persuade them to make the pins available this side of the pond along with all their other lovely stuff... they're just so much easier to work with than any other type of pin...

The audience for this process was quite keen and alert to start with, but as the several-hundredth pin went in they lost interest somewhat. 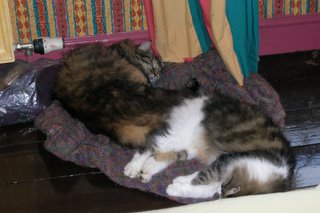 Serves me right for leaving my sweater on the floor last night...

Ten years ago
In the first lot of doing-up-the house; getting used to being married and living in a village; working in the same company I'm in now but doing a different job...

Five years ago
Finishing the first stage of embroidery City and Guilds; finishing the house renovations and enjoying having a Real Kitchen.

One year ago
Adjusting to living as a single person again (ongoing...); joining UKHK and marvelling at What Was Out There; teaching evening classes.

Five songs I know by heart
Country Life by Show of Hands; Born to Run by Bruce Springsteen; Rat Trap (and more or less everything else) by the Boomtown Rats; Love Minus Zero/No Limit by Bob Dylan; The Queen and the Soldier by Suzanne Vega.

Five things I would do with a LOT of money
Pay off my mortgage and that of anyone I know; Put enough aside to make sure my parents are OK in whatever circumstances; Open a savings account and put enough in it to cope with everyday emergencies like the roof blowing off; Buy a flat in a small city in France; Find a good charity for the rest.(if I've assured the above, anything else is Up to Me. Catholic sense of guilt/responsibility? Moi? Surely not)

Five places I would love to escape to
Someone else's head, just to see what it's like... otherwise... Flat in small city in France; Cottage on the beach in Northumbria/Norfolk; Serious Penthouse Flat in London; Friends' ranch near Dallas

Five things I would never wear
Anything made of an animal I wouldn't eat; Anything made by a company I distrust; Boob-tube; 4" heels; Digital-display watch (it'd just take me too long...)

Five favorite TV-shows
Don't have a TV; but based on ancient memory, DVD and watching other people's occasionally...
The West Wing (complete obsession at the moment but have only got to end of series 2 on DVD; I'm in the queue for series 3 from the library); Hill Street Blues; Inspector Morse; Messiah (have only seen The Harrowing); Blackadder

Five things I enjoy doing
Knitting; Hardanger embroidery; Being obsessively picky about spelling and grammar; Cooking when others are around to eat it; Sitting in pubs ranting with friends

Five people who get this meme
I'm just too new to this; anyone who reads this, please pick it up if you'd like??
Posted by Liz at 8:33 pm 1 comment:

Another day, another WIP...

I started this today: 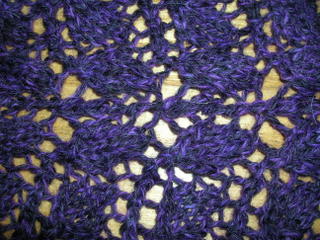 it's the Branching Out scarf pattern from Knitty , and due to it being my day off and also being half-term, so I don't have an evening class to prepare this week, I spent three or four hours knitting and have finished 20 repeats of the pattern; I think it probably needs 36 or so to get to full length... I'm using Sirdar Balmoral (now sadly discontinued), a DK/aran weight wool, alpaca and silk yarn from stash, left over from a sweater made for a colleague years ago. It started life as a cream/grey twist until I dumped it into a vat of purple dye. It's destined to become a Christmas present but I haven't quite decided who's getting this one yet...

Meanwhile the Mexican Wave sweater has acquired a fan club. Both sleeves and the back done now... 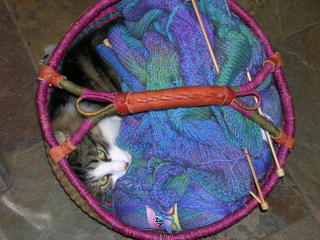 Not much knitting went on today - the first sleeve of the Mexican Wave sweater got finished and the second one started, and late last night I finished a sock. Most of today was spent cleaning, tidying and generally removing the swathes of assorted dross (and several kilos of assorted yarn) I seem to have assembled in the dining room over the last couple of months since I paid attention to it. The tipping point was the arrival of these: 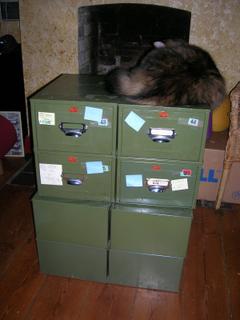 ex-library filing cabinets. They look as if they ought to be in a display at Bletchley Park containing vital code-cracking information, but in fact they came with an archive (unrelated to defence) we acquired for microfilming at work, and apparently the organisation didn't want them back once they'd been filmed so they were offered to staff. I think the manufacturer's mark on each drawer is particularly fine 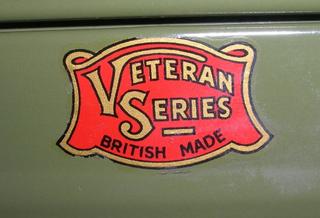 and will use them for storing bits of embroidery kit, tools etc. Each drawer is 20cm wide by about 40 cm deep by 15cm high, so there's quite a lot of space there... But this whole plan does centre on being able to get them into the back bedroom... so that's tomorrow's job...

(You can see by the first photo that Tilda likes the cabinets just about as much as she liked the scarf yesterday. She's difficult to please. She likes Whiskas, Greek yoghurt, sleeping on people's feet at night when it's really, really hot and sitting on knitting patterns. Anything else is beneath notice.)
Posted by Liz at 10:39 pm 1 comment:

I'm not a crocheter. I'm a left-hander who learnt to knit, use scissors, etc. right-handed, and this has never posed me a problem in everyday life (I don't count school art classes as everyday life; they were some sort of weird training in ritual humiliation) except with two implements: a carving knife and a crochet hook; which hand to use is a perennial puzzle. At least my travails with a carving knife result in something which is still vaguely useable; I can't say that about most of the crochet, although the smaller cat approves of the wobbly superchunky doormat I made earlier this year. 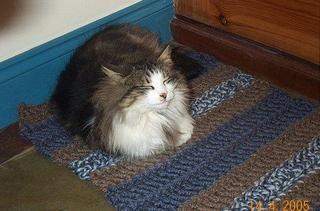 But all this talk of curlywhirly scarves on UKHK, and the acquisition of a couple of balls of gorgeous DK/aran yarn at Ally Pally, and a friend's impending birthday (the birthday is past; the gift-giving is impending), and a present of a stunning set of crochet hooks from friends in Texas, and the I'm-not-going-to-push-you-but one of-these-days-you'll-fall-and-happen-to-grab-a-crochet-hook-on-the-way-down attitude of a friend, and finally Pixeldiva's photos got me started. So, ta-da 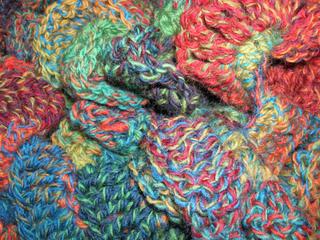 a pile of crochet. And because I have no human model to show it on and haven't managed to get a proper photo of myself wearing it, here's Tilda; I may also post this pic to My Cat Hates You... 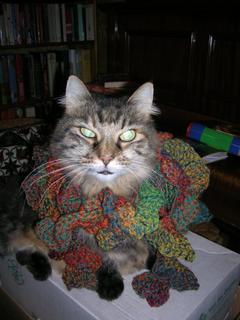 I hope Suzanne likes it more than Tilda does; because otherwise I'll have to wrest it from her and take it home again. The yarn is Limbo Color (colour 2539) by Schoeller and Stahl from Web of Wool and it took nearly 2 balls. And I'm a right-handed crocheter. I think...

It's generally been a crappy week, so a finished object to round it off is wonderful...

... was what they said on the radio this morning. Bah. Thought bitterly of this as I cycled to the station after work battered by Malteser-sized hail and assailed on all sides by post vans driven by homicidal maniacs. However, the station was dealing with the aftermath of this so I then felt very lucky to catch a train at all...

But some knitting now.

First: a warning. If you're of a delicate constitution you may want to skip the rest. I'm aware that there are many, many people out there with a deep and abiding love of natural fibres for whom this 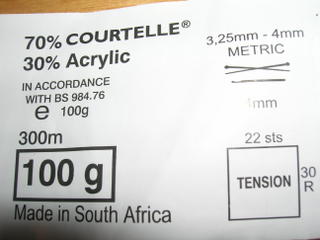 may cause distress. But I'm loving this sweater so far. This is Elle Mexican Wave. Long, tweedy variegation and wonderful oil-on-water type colours. It came from here, although they haven't got it on their website at the moment.

I started this on Saturday night after Ally Pally, and have finished the back 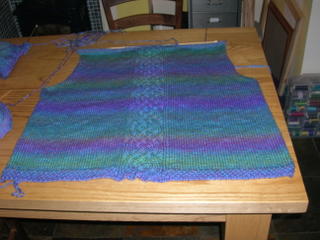 and started on a sleeve. 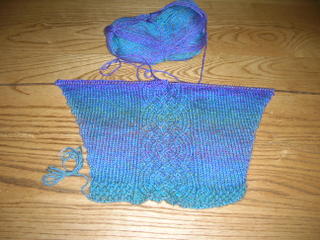 I'm intending to try and keep the big cables (the Saxon Braid variation used on Samus in this time's Knitty, if it looks familiar) going through the neckband by carrying straps over the shoulders; but as this is the first sweater I've worked out from scratch, this may be a little ambitious... Not quite from scratch; I'm using this book (thanks, Jan!) and then adapting for the shoulder straps. 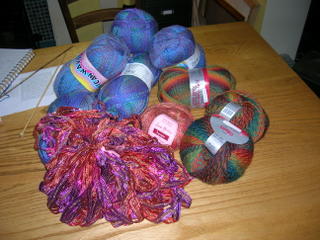 Inspired by the posts from Ally Pally, I'm dipping my toe into the ocean of blogging...

Ally Pally was fantastic; this is the 7th or 8th year I've been, and there so much more yarn there than previous years, and from all over the world. Special mention to the Alchemy people who were so friendly and enthusiastic at 9 in the morning while I was rambling round the traders' hall before it all opened.

A couple of other pictures of the stand I was stewarding (our embroidery group Fibrefusion). 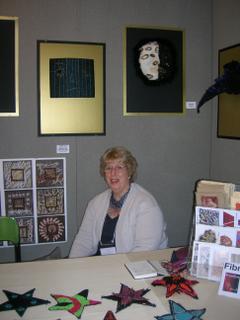 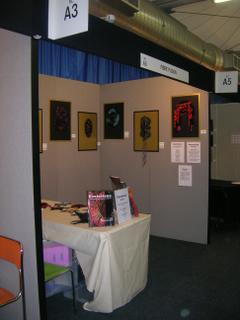 Pauline, the group leader among the cards and samples; and a general view of the stand. 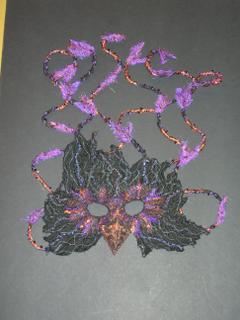 And this is my contribution; a mask based on Susan Cooper's The Dark is Rising sequence (fantasy for children/young adults); this all came out of a conversation in the spring with a friend who also read it as a child; put him off masks, and switched me on to them...

Tomorrow, photos of WIPs and I'll attempt to find out how all those clever things like links to other blogs work...
Posted by Liz at 5:38 am No comments: