Items on list: 17 (unchanged)
Items started: 17 (+2)
Items finished: 16 (+2)
Net progress since Sunday - +2
Items still unfinished which are needed for Christmas Day - 0.
I win.
(I should probably admit that one item was finished on the train, and another is still blocking, and the final one is only technically started. But really, who cares at this point!)
Happy Christmas, all...
Posted by Liz at 1:49 pm 3 comments:

If you don't want my rail rant, just look at the pretty picture, and reflect that this is enough snow to bring public transport to its knees in this neck of the woods. 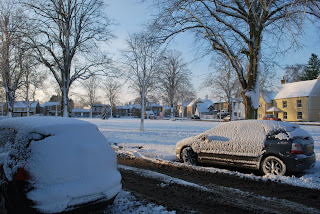 So, obviously, it wasn't as easy as all that. No Definitiveness. When I got up at 6:15, the snow was about 6" deep and the rail companies were saying different things. National Express East Anglia alerted me to the 0659, my usual Friday train, being "indefinitely delayed" due to Something-or-Other at Watlington; First Capital Connect ... well, let's just say that none of what ensued was recorded on their website.

Went down to the station for the 0732 which was delayed for 23 minutes. Sat there (knitting with gloves on) bitterly reflecting that predicting in last night's blog post exactly how long the train would be delayed might give me some satisfaction if the waiting wasn't in sub-zero temperatures on a metal seat.

Train pulls into Cambridge station at 0804 and announces it needs to wait for extra carriages.

Extra carriages arrive at 0820 and are hitched to the back of train.

*Extra carriages are detached from back of train; we all move back 4 carriages and start again.

By this time it is nearly 0900 (when I'm due to start work 60 miles away) - we are told it will be an indefinite wait until one or all of the "units" are fixed. Meanwhile, people with WiFi are reporting that the three trains after ours are cancelled.

Work happily until 2.30 when the power goes out for an hour. It's thawing fairly fast here and small branches are falling off even the impeccably-manicured trees round the Green, so presumably something fell on the power line. It was back about an hour later...

I'll make up the lost time sometime over the weekend, but for now I'm going to pick up my tea order from the post office and do some Christmas knitting...
Posted by Liz at 4:09 pm 3 comments:

Deep and crisp and drifty 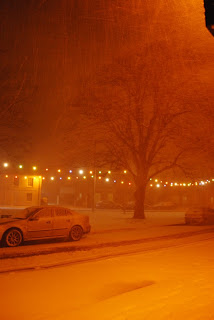 This is the view from outside an hour ago. Now, I know there are people from more wintery climes who regularly read this blog and will be laughing heartily at the pathetic picture this paints (although do click to embiggen the wonderful cross-hatching the wind is creating). But at least one of them has spent serious time in this country, and realises Quite How Much Havoc this will generate. This photo was taken at the point the BBC thinks we're getting "light snow" and 3 hours before we are due to hit "heavy snow". And it's seriously blustery out there...

I'm hoping that it will all get Definitive before I have to leave for work - on the announced-on-the-radio "there are no trains leaving East Anglia" scale of Definitive; rather than my having to plod down to the station to find that there might be a train in 23 minutes and then there isn't but the screens go blank and I stand there for ages and then have to come home anyway... In that case, I already have official sanction to come back home and start on the mountain of stuff I've forwarded to myself... I'd much rather wake up, find out it's impossible to get anywhere and do some decent work, preferably in my pyjamas.

On a completely separate tack, I went to the Poetry Library today for work-related reasons, and met some really nice people. After we'd finished the main part of the meeting we heard about their Lost Quotations service. If you can help, or comment, do!

On the way back from the Poetry library, a pigeon crapped on my hat. I was so utterly and totally affronted by this that it took me several minutes to realise that if I hadn't been wearing a hat, I'd have been dealing with pigeon-poop in my hair. And also made me realise I hadn't blogged the hat yet. Another day.

Countdown, not quite two weeks to go...

Eek. Having said that, I'm 80% of the way through the most complicated thing left on the list...
Posted by Liz at 10:12 pm No comments:

... or was John Humphreys and Justin Webb bemusedly covering Mr-Squiggles-gate and the "paedo" mouse song this morning one of the funniest things ever?

Apologies for the links to the Sun. It was that or the Daily Mail...
Posted by Liz at 7:44 am No comments:

Back to my needles... The usual Attempt at a Christmas tree went up on the Green today. I'd like to hope it'll last any length of time, but I'd bet it'll only be a matter of days before a) the wind blows it down b) joyriders crash into it c) the Yoof decide climbing it would be a great idea d) all of the above...
Posted by Liz at 7:22 pm No comments:

After a really nice evening at IKL last night, and an earlyish night, I woke up this morning feeling completely appalling. Couldn't work out whether I was getting flu, or whether I wanted to throw up, or what. So apart from a trip downstairs for water and pills, and another to phone work and let them know I wasn't going to be in, the morning sort of didn't happen.


This afternoon I've been feeling a lot better; and sometime or other while I was lying around feeling sorry for myself, this happened outside... 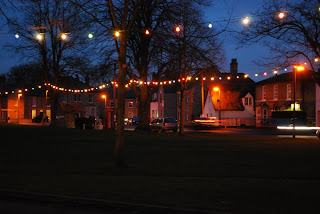 It's amazing how a single line of coloured light-bulbs can make somewhere look magic. And at least this afternoon I have the energy to knit...
Posted by Liz at 4:22 pm 2 comments: