So. The torch will be passed on to Sochi at Vancouver tonight... and I've managed to finish my Olympic projects. This was looking very unlikely last weekend but I squared up to the challenge and have spent most of the weekend knitting away...
Exhibit 1: St Brigid. 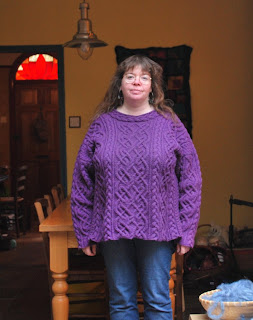 The start date on this of January 05 was very approximate - I can't actually work out when I did start it... but anyway, she's finished. And I've been wearing her all day during the miserable, cold, rainy weather. I'm regretting lengthening the sleeves by half a repeat, but mainly because I've lost nearly 3 stone since I started her; I'm sure this was a sensible decision when I made the first sleeve! That was my Cambridge KTog project; and here's my medal!

And then tonight, right under the wire at 11pm, I finished the IKL project, a Clapotis for the UK Knit Camp Clap-o-Tea party in August...
Exhibit 2: the Summer Silk Garden Sock Clapotis... 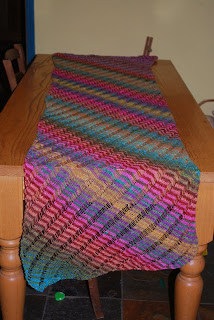 Phew. It's not been the greatest fortnight really in Actual Life; but it was nice to achieve something and clock up some serious knitting metreage...
Posted by Liz at 11:30 pm 8 comments:

The Ravelympics progress is, well, progress... Neither of these pieces of knitting existed until last Saturday morning, so I've knitted a fair amount this week, given that I spent time sampling for and teaching a couple of classes! But I'm still only just halfway through, so will have to speed up a little... 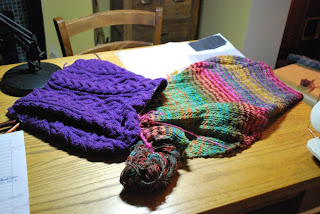 On the left, St Brigid, which is four-and-a-bit repeats in (needs 7 repeats before the neck shaping start), and on the right, the Clapotis in Noro Silk Garden sock yarn (about 60% complete). I'm using two balls of the same colour, one outside-in and the other inside-out; and wondering whether it's going to be too short and too wide...
Posted by Liz at 6:34 pm 1 comment:

Charlie Parker finally investigates his past - we've had inklings of this in previous books, but the truth is even weirder than you think it's going to be. Usually, the introduction of any hint of supernatural force into a crime novel is a complete turn-off for me, but somehow Connolly can do it (Greg Iles is the other one); the only balance against Parker's very skewed morals is the sort of pure evil he's fighting. Jeff Harding's reading is, as ever, spot on - but then, frankly, the man could read the Yellow Pages and make it sound riveting.

I've ranted about this book before but re-read it for the London Kniterati's February meeting (having suggested it in the first place!) Everyone who turned up had read and enjoyed it, which made me extremely happy. And yes, it easily stands a fourth read-through!

I looked into James O. Born after reading a short story of his in Michael Connelly's anthology from last year. This is a book which really begs to be made into a heist film. Unfortunately, I think it would make a much better film than it would a book - the plot is great, twists and turns galore; but the characterisation isn't always strong enough that you can work out who's who without going back a page or two; the violence is somewhat cartoonish; and you feel very little real sympathy for any of the characters.

This is a quick, fun read; a mystery set around a needlework shop. Probably not strictly what they'd call a "cozy" in the US, given the high body count, but interspersing needlework details with international criminal activity and slayings is interesting! Definitely recommended for a nice, light read if you like crime and crafts...

A group of Islamic extremists storm the Chamber of the House of Lords during State Opening; a group of hostages including the Queen, Prince Charles, the Prime Minister, his son and the son of the US President raise the stakes, and the person in interim charge is the wildly ambitious, self-serving Home Secretary. The geographical details of the House are impeccable, the plot is gripping and the characterisation is as good as you'd expect from the author of the House of cards series. Highly, highly recommended.
Posted by Liz at 9:51 am 2 comments:

It's all been quite slow around here at Knitting on the Green. The Seasonal Thing I usually get has been absent for the last couple of years, only to come back and kick me in the head with a vengeance this year. The NHS site says that staying warm is part of it, and that's been all-but-impossible with the temperatures this year, so maybe that's it. Anyway; although I've been here, and knitting (mainly on stealth projects), I haven't been talking about it... or anything else since my spate of invective about the railways in early January!

But the Olympics are here, and with them the Ravelympics. 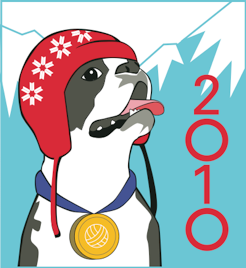 The idea was originally kicked off by the Yarn Harlot, who is also running her original Olympic challenge again - and if I hadn't become co-captain of the KnitCambridge team and a member of the IKnitLondon team before she announced she was going for it again, I'd absolutely have been doing that one, not least because Franklin will be designing the medals again (see sidebar for the beauty of the 2006 one...)

Three Olympic challenges = too much, given that I'm teaching two classes on February 19th (yes, it's Textiles in Focus time of year again!) and one on March 7th (at White House Arts) - all freeform type stuff, which you can't really stop sampling for...

I'll introduce/re-introduce you to the Olympic projects as we go along... I'm aiming to knit one new project and finish one long-neglected one...

It's the fifth annual cyberposting of poetry to celebrate St Brigid/Bridget's day. Officially this is tomorrow; but depending on where you look, the day is either the 1st or 2nd February...

I took a break last year, after a somewhat mixed reaction to my choice in 2008. This is another one about babies, but a cheerier one, and has been rattling around in my head as three of my friends have had babies since Christmas. This is for Thomas, Katharine and Emma.

Tightly-folded bud,
I have wished you something
None of the others would:
Not the usual stuff
About being beautiful,
Or running off a spring
Of innocence and love -
They will all wish you that,
And should it prove possible,
Well, you're a lucky girl.

But if it shouldn't, then
May you be ordinary;
Have, like other women,
An average of talents:
Not ugly, not good-looking,
Nothing uncustomary
To pull you off your balance,
That, unworkable itself,
Stops all the rest from working.
In fact, may you be dull -
If that is what a skilled,
Vigilant, flexible,
Unemphasised, enthralled
Catching of happiness is called.

And thanks to caughtknitting, who sent me a St Bridget's Day card!
Posted by Liz at 10:05 pm No comments: