First thrills, edited by Lee Child. Corvus: 2010. Kindle edition.
This is an excellent collection, with only one slightly duff story in it. There are stories by well-known authors like Child, Jeffery Deaver, Alex Kava, CJ Lyons, Heather Graham and so on, and also (the point of the collection) stories by unpublished or just-published authors, which are equally strong. There are a mix of seriously creepy stories, one zombie tale, a couple which cross over into science fiction or fantasy and several with wicked twists in the tail. Highly recommended and a great first read for this year.
Cambridge blue, by Alison Bruce. Robinson, 2010. Kindle edition.
A new-to-me author; downloaded this, like the last one and the next one, as part of Amazon's £1 Kindle promotion over Christmas. The thing which always worries me slightly about books set in locations I know well is whether they twist the geography, but this is perfect; when the main character, a young policeman called Gary Goodhew, walks the streets of Cambridge, you know exactly where he is at any time. This covers a series of murders over many years, and the characters are largely believable. The one weakness may be Goodhew himself, though - he does go off being a complete maverick, in the Morse mode; but it doesn't seem realistic that he's able to do this as a DC, given the number of warnings from his boss he ignores along the way.
1222, by Anne Holt. Corvus, 2010. Kindle edition.
This is an amazing 'locked-in' type of thriller - the express from Oslo to Bergen crashes on a mountainside near a large tourist hotel in the middle of a snowstorm (at an altitude of 1222 metres) and the passengers are taken in. The weather gradually worsens and nobody can leave. Then the first murder is discovered... The only police seem to be guarding a mysterious personage on the top floor, and the only investigator present, Hanne Wilhelmsen, is a retired police officer who is paraplegic as a result of a shooting years before. At one stage, the author invokes And then there were none, but this is just so much better than that. I think it would make a fantastic disaster movie as the circle of suspects narrows and the weather becomes a main character in the drama. I'll be looking for more in this series.
Strange affair, by Peter Robinson [audiobook]. Narrated by Ron Keith. Rearsby, Leics: Clipper, 2005.
An Inspector Banks novel and not one of his best. It chugs along OK, and Banks is always an interesting character, but I had the feeling that it could have been about three-quarters the length without losing much of the plot or characterisation. The reading wasn't great either; the Banks books are usually narrated by someone else, and this reader hadn't gone with the same pronunciation - a character pronounced GRIZE-thorpe for the rest of the audiobooks suddenly becomes GRISS-thorpe, causing much shouting in the general direction of the CD player here.
Blood, sweat and tea, by Tom Reynolds. London: HarperCollins eBooks, 2009. Kindle edition.
I've been meaning to read this for a while; I started reading "Tom Reynolds" (actually Brian Kellet)'s blog three or four years ago in the wake of the 7/7 attacks on London, but hadn't gone all the way back to the beginning. Reynolds is an ambulance driver and first responder for the London Ambulance Service, based in Newham. He recounts his shift when he finishes each day, partly as catharsis and partly for the sake of public information. Sometimes it's euphoric, when he or his crew have actually saved a life, sometimes desperately sad. He worries about emotional burnout and the way the world's going, while trying to avoid suicidal pedestrians leaping in front of his ambulance. He comments on the emergency services and the NHS, drug and alcohol misuse and the increasing misuse of the ambulance service for minor injuries. He claims to hate everybody, regardless of race, colour or religion; but the amount of compassion in these diaries exposes this as a lie.
Posted by Liz at 10:22 am 1 comment:

... and out the other side. Happy New Year, all!
The 6 weeks or so before Christmas passed as something of a blur of activity and tiredness. I had a work trip to Luxembourg - am determined to share some photos of that as I have some nice ones - and then a visit from the parents the following weekend, and then we went into the Christmas countdown...
And in the middle of all that, bouts of half an inch of snow, or a spot of black ice, or whatever, brought the transport system here to a halt. I could totally understand that -15C near Huntingdon didn't make the power-lines very happy on December 21 though. Temperatures of -7C here on the same day didn't make a fruitless hour standing at the station very happy either; thankfully I have limited work access from my home PC... Struggling back and forth for most of December from King's Cross (which was trying to operate trains to Scotland and back at the same time, and mostly failing) was incredibly draining and stressful. Unexpectedly so, given the previous winter, but that was just after Christmas when you generally expect everything to be just a bit shit.
Losing PC access for a chunk of November, equally so; thanks muchly to Nick who recommended a good, reasonably priced repairer (these guys, if anyone in the local area needs one!) and helped me get the Humungous CPU back and forth, while being optimistic that I was unlikely to have lost all my data; which I didn't. It was, as he'd originally diagnosed, a burned out power supply. (And I am so profoundly glad I didn't get rid of my sewing machine trolley last year when I was looking to tidy the cupboard under the stairs - it did the job womanfully.)
There's still stuff I haven't caught up on though - somewhere, there's a bit of paper with all the November and December knitting on it, in terms of weights and metreage. I think it may be in the pile by my left elbow. Doubtless I'll find it eventually. Hence no guessy-game competition this year (although Steph and Valerie had to wait over a month for their stash from the anniversary one, so possibly just as well!)
Anyway. The New Year's Resolutions generally centre around Getting My Stuff Together and Keeping in Touch More (again). But 2010 wasn't the best of years or the worst of years. There was KnitCamp, which was actually some of both (awful before and after, wonderful during); my parents got down for a couple of visits which hadn't happened for a few years due to cat issues; I saw some really good plays, knitted some excellent things, read some really good books...
Couple of Christmas-related photos. First, nephew next to my parents' Christmas tree, wearing his Birthday Jumper. 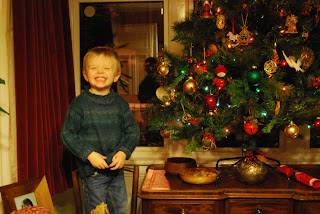 Doesn't look too distressed with auntie's knitting. Fibre snobs, look away now. That's James Brett Marble. 100% acrylic, supersoft, lovely colours, and priced very appealingly. And it fits the way it was meant to. (His Christmas sweater, not so much; but that was top-down so all I had to do was lengthen it a couple of inches and it ought to be back to them in the post tomorrow.)
Second, Christmas present from my parents. 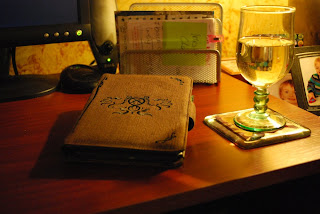 It's a Kindle. You mightn't have guessed this because I do seem to have a compulsion to make any piece of technology I own look either cute or antiquated. In this case, I think I've achieved both with the slightly steampunk hemp cover which arrived yesterday. It's a lovely bit of kit - had a few teething troubles working out how to transfer books to it without Wi-Fi, but it turns out to be dead easy, although something which should possibly be included in the Quick Start guide rather than after half an hour's study of the help forums... The first two books I've read so far this year have been in Kindle format - am going to have to go back to Dead Tree Format for the next few though, because I've got a couple of best-sellers out of the library and am determined to diminish the Huge Heaps of Books on the Piano this year. And get rid of the piano, too. We'll see how we go.
Anyway, I'm sort of back. Hoping to blog at least weekly for the next couple of months, and probably more often after the Death of Winter.
I've finished two knitted items already this year, but can't blog either for different reasons; and I still have one Christmas item on the go - the recipient Knows Who She Is...
Posted by Liz at 7:53 pm 3 comments: