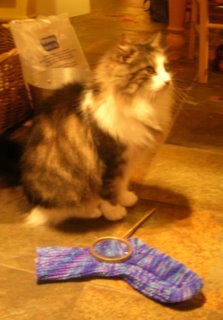 ... the Case of the Lone International Sock of Doom.

Actually, the real mystery is that this sock exists at all - I'm astonished to be photographing it less than 24 hours after casting it on at 10:20 last night on the train back from London. I went to this (yeah, I get all the good gigs; actually, it was pretty interesting, if totally knackering, and will probably save me loads of unnecessary work) and then met Jan; we visited the knitting group at Liberty (including meeting Yvonne and Sue again) and went to find something to eat, at which point we realised a) just off Oxford Street on a Thursday night in December might not have been the best choice and b) my exorbitantly-expensive and work-funded rail ticket had fallen out of my pocket while it was tucked under a bench in Liberty's, which was, by then, 3 minutes off closing. The distraction caused by the latter meant I didn't even look at the bag of goodies I came home with until I was on the train... copies of two of Jan's books (thanks!!) 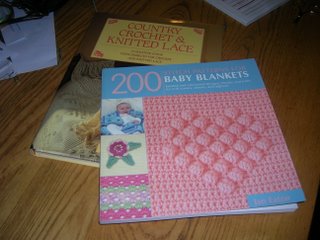 one brand new one (the pic here's the US edition, the link's to the UK one which has a different cover), and one out of print one... As ever, with both, the knitting's enticing but the crochet looks like complete magic and makes me vow to try and have a go... Also the Winter IK and Holiday Vogue, picked up for me at Stash...

Back to the sock because I'm still ensorcelled - the yarn's cream King Cole Anti-Tickle Merino, dyed with Ultramarine at full strength, and very dilute Violet and Turquoise (all acid milling dyes from AVG). I didn't participate in Sock Wars, but came across the pattern while Googling 'socks DK' and decided to give it a go. These are for bedsocks, a Christmas present for a cold-footed friend who likes these colours. 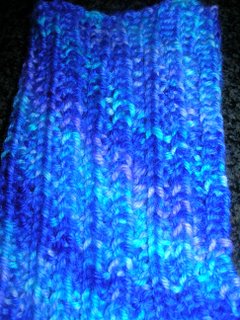 I'm pleased with the way the yarn has pooled on the leg - just hoping the other skein, dyed in the same bundle as the first one, will do the same... They're a really quick knit (I reckon the first one took 3 hours or so - a lunchtime at work, an hour's train journey and about the same on the bus tonight...), the rib is lovely and stretchy, and with the lengthened legs (I added 5cm), take a fraction off one ball each to knit (say 110m each)... Even the dreaded toe-grafting worked; presumably with DK I can see what I'm doing... or maybe there's just a charm on these socks. 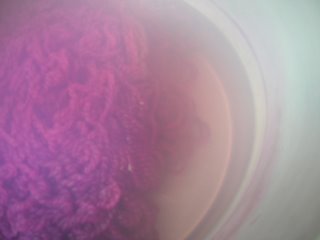 I did some dyeing on Tuesday; will blog that when I've finished the child's sweater I need to make with the results. But look; I finally managed to get a pan of magenta dye to exhaust! I acquired a lovely big preserving pan from Clarissa Cochran through CamLETS last weekend and although she was rightly sceptical about dyeing in an aluminium pan, it seems to have worked very nicely with all three batches of the yarn I tried (three lots of Beehive Shetland Chunky, which dyed beautifully despite being 50% acrylic).

Also, Daughter of Sherwood is finished and made up - will blog her once she's washed and pinned out...

It was great seeing you both at Liberty's.

Your books made me smile - I'd bought the crochet one the week before in a charity shop and had meant to bring it along to Liberty's to beg for Jan's autograph!